The largest beetle on the planet, if based on weight and bulk, the Goliath beetle of central Africa is also one of the strongest, capable of lifting 850 times its own weight. The larvae are far bigger than the adults and reach nearly 10 inches in length, while adult males can grow to be 4 1/2 inches long. Males have a Y-shaped horn used to fight and defend territory.  They feed on fruit, decayed animal and plant material and, like some of their scarab beetle relatives, they will also eat dung. 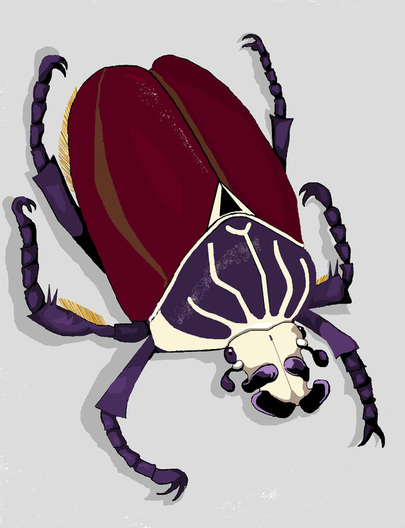 Goliath Beetle is a bit of a mystery.  No one knows where he came from, but he's certainly not from Meadowfield.  He is the biggest pest any bug-fellow has ever seen and he speaks in a language no one's ever heard.

Earwig discovers Goliath, wandering around in the shadows of the Smoking Hills. Using globs of Loomer food, Earwig is able to control the creature and lure him to the Great Cicada Emergence Ball.

To find out what happens next, you'll have to read The Great Cicada Ball.  There's also a good chance you will run into the big beetle again in the pages of Book Three: ﻿Heroes of Meadowfield﻿.