Honey bees are social insects, which means they live together in large groups.  In the wild, they may build a hive in a hollow tree.
There's usually one queen.  She lays her eggs in brood cells.  At first, larvae are fed royal jelly; later they are fed flower nectar and pollen.
Worker bees make honey which is stored in honeycomb to be used as food for the colony. 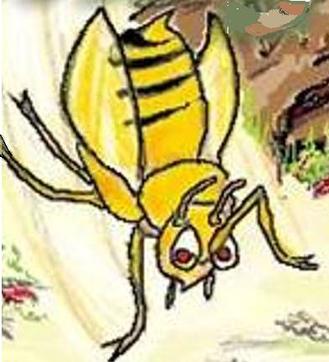 Worker 1200 makes her appearance in the very first chapter of A Pilgrimage of Pests.  She is a she because all worker bees are female.  And, as the name indicates, all Worker 1200 does is work!  Wow...what a life!

When we meet her in the story, it is the break of dawn and her work day has already begun.  But first, let me remind you, in Meadowfield they aren't called days.  They are called 'suntimes'.  You see these bug-fellows often have their own names for things; and sometimes, my young readers, it is up to you to figure out just what they may be talking about.

Worker 1200 is working extra hard to get ready for the Great Cicada Emergence Ball, the first one in 17 Warming Times and 17 Great Colds.  It's all being planned by the Queen Bee. The Great Cicada will be making his appearance very soon.  Worker 1200 knows that her queen will accept nothing less than perfection.  And time is running out.
﻿

Back to Pilgrimage Homepage