Anyone who handles a stinkbug soon finds out how they got their name.  Under their chest region, called the thorax, are scent glands that produce a foul-smelling liquid which they release any time they are disturbed.  These bugs feed through a needle-sharp mouth part which they use to pierce and suck the juices from the fruits and stems of plants.  Like all true bugs, they have two pairs of wings.  The front wings are hard and the back pair, which are paper thin, are tucked below the front wings. 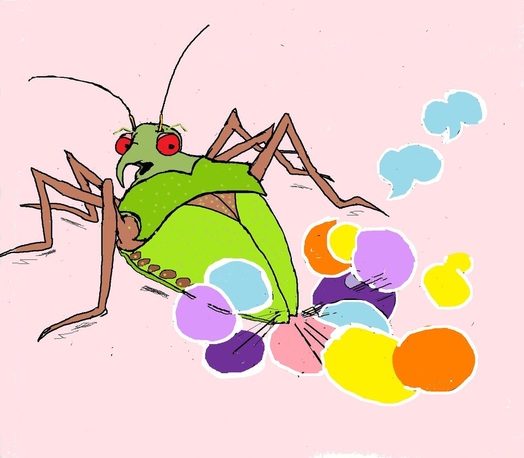 Stinkbug first appears in Chapter 6 of A Pilgrimage of Pests and she remains a major character throughout the trilogy.  She lives in the woods in an area called where four tree-tops touch.  It is also where  the mysterious beetle, Scarab the Dung, has her home in an underground chamber buried below a rock pile.  Bashful and kind, Stinkbug is a bug-fellow with a personality that couldn't be more different from that of the ill-tempered Cockroach.

Because of her jittery nerves, Stinkbug often cannot control her so-called 'perfumery'.  It's really nothing like perfume and when it explodes from her body in colorful, foul-smelling clouds of vapor, everybody knows it.  She's a colorful character in more ways than one and you can follow her exploits as well as all the other bug-fellows in the trilogy, Cockroach of Meadowfield.﻿﻿
Below are two similar videos about a type of stinkbug called the Brown Marmorated stink bug.  These critters are a real nuisance.  The Meadowfield Stinkbug in Pilgrimage of Pests is a Green Stinkbug or Shield Bug...not one of these invasive species from Asia.
Both of these videos are narrated by entomologists; scientists who study insects.  In the first video the entomologist works at the Smithsonian Museum.  Keep this in mind.  You'll learn more about the Smithsonian's National Museum of Natural History in Washington D.C. when you read the final book in the trilogy, Heroes of Meadowfield.
Back To Pilgrimage Homepage