Neighboring water molecules stick together (a property called cohesion). This forms the "skin" on water surface. Water striders take advantage of this surface tension to support themselves. They spread their weight evenly on their spindly legs,walk, hunt & breed on the top of still water. Their legs have water repelling hairs. They glide on a cushion of air trapped between their legs and the top of ponds and streams. One group represents the only insects that live fully in (or on) salt water. 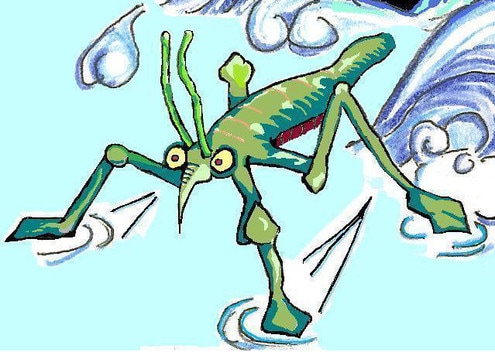 Water Strider is one of the racers who can be seen competing against Water Scorpion, Backswimmer, Whirligig and others during the wildly popular Waterboatmen Races held on Meadow Pond.

The series of races planned during the Great Cicada Ball are the biggest in recent memory and Water Strider is sure to be in the thick of the competition.  The shoreline will be crowded with spectators, especially the obnoxious ants who never miss a race.  The Queen Bee will sit in her own private viewing area and Old Yellow Fat, the grasshopper who organizes all the races, will be certain to have everything ready for the big event.

Be sure to read Book Two, The Great Cicada Ball, and find out who becomes the next Waterboatman Race champion.

Here is a short video about how the water strider is able to move on the surface of the water.

How do water striders move? – AskNature Nuggets from Biomimicry Institute on Vimeo.

Back To Great Cicada Homepage