Up to 60 mm long, the uncommon Stag beetle is North America's largest beetle. They're named after the male beetle's enormous antler-like jaws or mandibles, used to attract females and wrestle off rival males. Females are smaller and lack the large mandibles. Stag beetles are unable to chew. They feed on fruit juices and tree sap. Medieval peasants in England believed stag beetles carried hot coals in their jaws and used them to light the villagers' homes on fire. That's not very nice, is it? 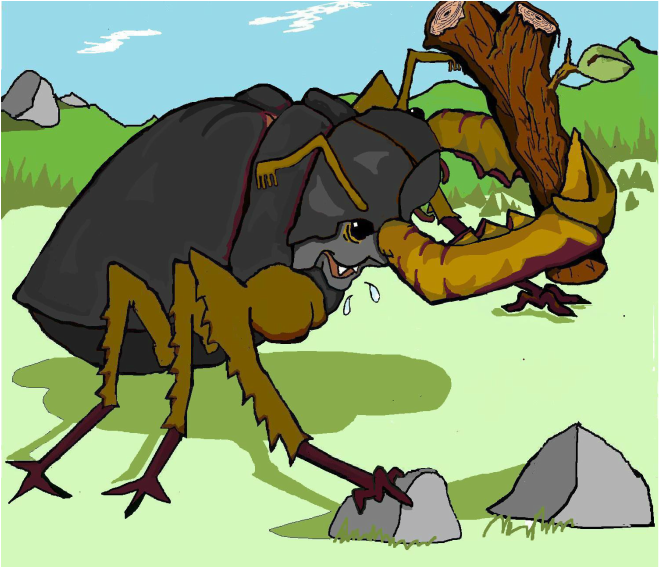 Stag Beetle is a pest with a one track mind. In his own words: "I got problems, ya know, ‘member’n’ things sometimes, with all da shots I’ve takin’ in the ol’ noggin."
One thing he doesn't have trouble remembering—and the only thing he ever thinks about—is winning the Ground Beetle Fights.
Other than the highly anticipated arrival of the Great Cicada, the Ground Beetle Fights are the Ball's biggest attraction.

Stag beetle claims to be a former champion and he refuses to accept the fact that he might be washed up.  He is constantly consumed with getting himself in fighting shape, doing, among other thing—branch lifts—over and over and over. He talks Stinkbug into becoming his trainer, even though she knows nothing about fighting or how to train a fighter... and... well you'll just have to read Book Two: The Great Cicada Ball to see if Stag Beetle is able to back up all his boasting and wear the championship crown once again.

﻿You don't need to speak Japanese to know what this video is about.  Beetle fighting is a really BIG sport in southeast Asia—wildly popular in Japan and Thailand. The beetles are fed and bred to be fighters.

There is a bit of irony in all this.  You see, while I was writing the book and trying to think of what kind of events might be featured during the Great Cicada Ball, I came up with the idea of bug-fellow Ground Beetle Fights. I had no idea it was a real sport in many parts of the world. I mean they film the fights, have announcers, the whole nine yards.  Who knew?

So, down below, is a video of one of these fights.
May the best beetle win.﻿
If you liked that, here's a series of several matches
China is beginning to pick up the beetle fight fever!
Back to Great Cicada Homepage